What happened when Cornell University tried to reign in an out of control deer population by performing tubal ligations on the does?

Well, as you’d expect, the birth rate went down, but the problem wasn’t solved: the population stayed the same, as it was maintained by mature bucks …

Something was attracting an abnormal number of mature bucks. Cornell’s biologists realized that the reproductive cycle of the ligated does was to blame.

Under normal conditions, all female whitetails go into heat within several weeks of each other and become pregnant at around the same time. This annual event is called the rut. However, if a doe is not impregnated during the rut, it will enter heat again the following month and again the month after that. Because the ligated does were unable to become pregnant, they continued to produce chemical signals of readiness to reproduce — signals that can attract bucks from miles away. 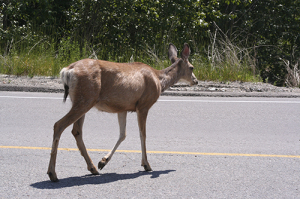 Cute, but catastrophic when mixed with traffic.

Volunteer hunters (who would eat or donate deer meat) are a proven inexpensive and effective way to reduce the population, but the university continued to seek out a nonlethal solution to the “deer problem.” So they began surgically removing ovaries from does, and were yet again quickly met with another unbelievable surprise:

Even after the surgical removal of their ovaries, one of the three deer became pregnant again. It is not clear how this was possible. One supposition is that some ovarian tissue may have escaped the scalpel and regrown into a functioning ovary.

Of course, this reproductive tenacity is probably a lot more fascinating (and amusing) to people who don’t have to deal with deer eating their gardens, causing auto accidents, or Lyme disease, but it does serve as a valuable lesson of the things that can go wrong when we try to outsmart nature. The ovaries win this round!