Big win for dog owners who want to dine with their furry (or not-so-furry) companions in New York recently:

By a 60-0 vote on Wednesday, the State senate approved a bill that lets food service establishments indulge four-legged guests, by allowing restaurants to welcome dogs (if accompanied by a diner) into their outdoor eating areas. The State Assembly is not reviewing its version of the same bill, and its sponsor is confident it will pass.

More and more dining establishments are becoming dog-friendly, and it is great seeing New York get on board this train. With the average American work week creeping back up to 47 hours, forcing people to spend more time away from their homes and their pets, dog-friendly dining establishments offer a welcome opportunity to go out and “have a life” without leaving Fido behind.

There are always concerns about dogs begging, getting into fights with each other, even jumping up on servers carrying heavy trays… but to that, we say: socializing and training your dog to be a polite companion is an investment of time and love every responsible pet owner will make. Furthermore, no responsible pet owner is going to foist an ill-mannered or aggressive dog on a restaurant (that wouldn’t exactly be responsible, now would it?). So when this bill passes, celebrate by going out and have a meal with your dog as an ambassador for the best in pet ownership! 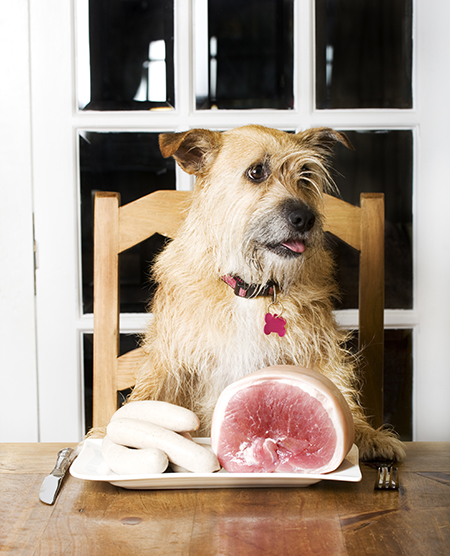 Probably not what the restaurant meant when it said “dogs are welcome.” 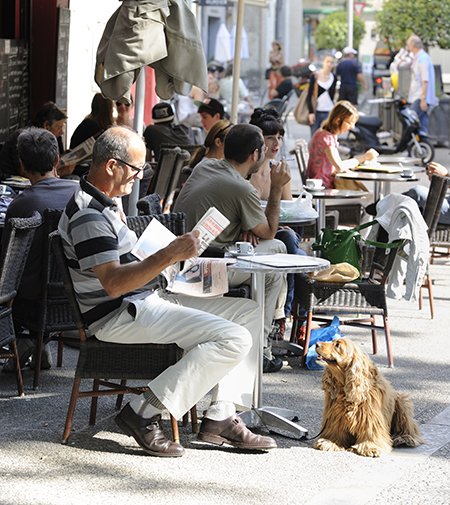 Last week, we read some heavy straight-talk from Charlene Marchand and Ron Perez of the Columbia-Greene Humane Society/SPCA regarding the irresponsible and cynical importation of rescue animals, and the effect it has on the chances of local dogs. Given how often we report on this issue, it was tempting to leave this alone in favor of other stories, but we kept coming back to it. In the end, their story was too important for us not to share.

This zinger, illustrating the frustration when progress in animal welfare meets cynical opportunism, is worth the price of admission:

Didi Kline, founder of CGHS/SPCA, would have never dreamed that dogs 10 years or older would be finding second homes. And even the once loved, frequently ignored and often feared “pitbulls” (a loose term referring to bulldog and bull terrier types and mixes) were being adopted — and the owners found them to be incredible companions. Then, everything changed again when “rescues” in the northeast started importing dogs from the southeast, Puerto Rico, Mexico and even Russia! Why? There were still dogs here in the northeast that needed homes. The answer is: money! I once said that if there was money to be made in animal welfare, there’d be a shelter on every corner. Well, now there is.

First off, it takes guts to call it as you see it. It really does, especially when it comes to animal welfare and rescue issues, where even the slightest of disagreements can lead to a lifetime of name-calling and ostracism. This is an issue we have covered regularly for more than a decade, and we know all too well how some people perceive the criticism of certain bad practices as an indictment of all rescue — the responses can be downright vicious. Secondly: bravo! What a breath of fresh air. We share their frustration and couldn’t agree more with the sentiment.

What a great piece. The only thing we’d add is that when helping other regions of the US, efforts must also be made at the source of the population surplus: education and “changing the culture,” accessible low-cost spay/neuter options, enforceable roaming/leash laws, etc. Without those efforts — which have worked wonders in many parts of the country — animal rescuers are put in a position of perpetually exporting one region’s problems into another. As always, the end goal should be finding permanent, caring homes for every healthy and safe pet, until we reach a point where private rescues and shelters are no longer necessary.

Here’s a little something that will be a surprise to hardly any animal lover: animal-assisted therapy (AAT) can be a big contributor to positive results in treatment for physical, social, emotional, or cognitive problems in children.

It has already been documented that adults will see a reduction of anxiety and pain severity with AAT, and there is a ton of anecdotal evidence to support the benefits of animal visitations with children suffering from physical or mental trauma, though we still have a ways to go in collecting and measuring the results.

But so far we do know that hospitalized children are more independent, have better appetites, pain reduction, and less fear of their experience/treatment. Some children with autism have shown remarkable improvement in the presence of a therapy dog, as well.

And, like many working animals, therapy dogs love their work. They couldn’t be happier around their people: the attention, the fawning, the petting — what a tough “job” to have! Talk about a mutually beneficial arrangement!

Animal-assisted therapy is an example of the human-animal bond at its finest — a growing field of study we can count on to yield even more benefits as it is further explored. 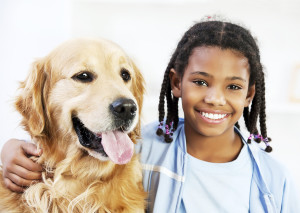 Kids and dogs are a natural fit — how perfect is is that dogs can help children cope with illness and the recovery process?

Have read over this old UC Davis article about treatment for newborn horses with neonatal maladjustment syndrome several times, and wanted to talk about it. Unfortunately, we’ve been struggling with what to what to say, because they cover virtually all the angles in the article — we’d be doing little more than paraphrasing, why bother with commentary? So with that in mind, just follow the link and read it. It’s fairly substantial, but well worth it if you are interested in the issues it touches on: animal welfare, veterinary science, and even autism.

It is a fascinating, heartwarming, and inspirational piece illustrating ingenious problem solving that improves the lives of animals and those who care for them — with the potential for understanding and helping human beings down the road, as well. 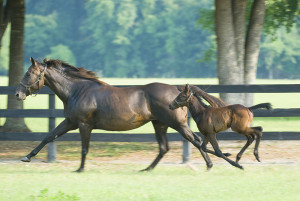 Veterinary researchers have reduced the symptoms of maladjustment in foals by employing the “Madigan Foal Squeeze Procedure,” which mimics the pressure normally experienced in the birth canal. Foals are up and about, join the mare and begin nursing afterward.
Contact