Most kids love dogs, but not all kids love reading aloud. For some children, reading in front of adults or peers makes them extremely anxious or embarrassed, and can contribute to them falling behind in reading fluency — a very dangerous road to go down.

A student who can’t read on grade level by 3rd grade is four times less likely to graduate by age 19 than a child who does read proficiently by that time.

But again: most kids love dogs. So here’s where Ghost, a champion show dog and great listener comes into the story.  Ghost’s owner Dawn Eliot-Johnson brings him to Harrison Elementary School every two weeks, where third and fourth-grade students read to him as he dutifully listens (and often sleeps) while curled up beside them. Ghost, along with many other dogs across the country perform this duty for kids who could use a bit of help reading aloud, and it’s not just a fun break from classroom routine… it works!

Kids who were once too shy or embarrassed about their skill level to read out loud are blossoming. They know that Ghost just wants to listen to a good story — no criticism, no corrections. It doesn’t take long for fear and anxiety to go out the window.

The idea is simple: it’s a privilege to read to a dog. Instead of reading aloud while focused on avoiding mistakes, they’re reading to an adoring, completely non-judgmental audience. Reading becomes a positive, rather than nerve-wracking experience; they gain confidence and an enjoyment in reading, which in turn improves comprehension and fluency. The dogs love it, too: it takes a special, gentle dog who doesn’t just tolerate, but truly enjoys children to thrive in this setting. And as a side-benefit, it also serves as a great opportunity to teach children another life-skill: how to behave safely and respectfully around dogs. Win-win! 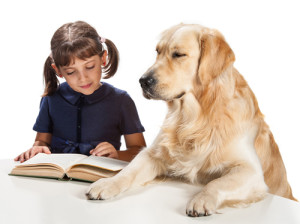 Having kids read to pets to avoid anxiety and fear of judgment by adults or peers is not a new tactic — groups like R.E.A.D. and Reading with Rover have been around for years, but in case there are still any doubters out there, research is now demonstrating an improvement in reading fluency, showing that they’ve had the right idea all along.

The world of animal welfare can be such a battlefield at times, it would be a shame not to look up from the trenches from time to time to celebrate great ideas like this!

A recent story about a natural foods market’s run in with a local activist neatly illustrates the point that when it comes to the animal rights mentality: that it’s never really about the level of care, but ending animal use by humans altogether (and yes, this includes owning pets).

Of course many people don’t realize this, so when Local Grocer owner Heather Chase put together a class on how to ethically raise and process chickens (naturally, including information on how to slaughter them), and became the target of an animal rights campaign, it probably seemed odd to some onlookers. After all, aren’t the animal rights folks always campaigning against people who don’t ethically raise animals? Why on Earth target a “sustainable,”  “beyond organic” operation? Well, for the answer to that, simply refer back to paragraph one: because it’s not about the level of care; in there eyes there is no such thing as “ethical meat.”

Since becoming a target, animal rights activists have harassed the Local Grocer owner, given her store negative online ratings, and their ringleader has received a no-trespass order. All small potatoes in the scheme of things, but a clear and timely example that no matter how high your standards are, no matter how well you treat your animals, it is not enough.

“Why not do it the best way we possibly can?” said Chase.
But Slitt says she wants to challenge the idea that there can be “humane meat” and “sustainable animal agriculture.”

This is an important point to remember for everybody who lives with and works with animals: whether you farm, breed dogs, run a lab, or simply enjoy owning pets, the end goal for the animal rightist is not to improve you, but to stop you.

So keep treating your animals as well as you possibly can, take pride in the knowledge that you are ethical and caring and have given your all, and make sure you are operating on standards you agree with, standards set by people who actually work with animals, not those opposed to animal use altogether. 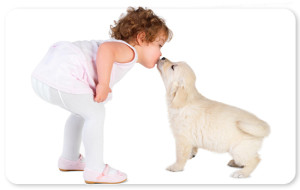 No matter how you frame it, somehow, some way, somewhere, somebody out there is utterly convinced that this puppy is “suffering.”

Everybody knows that responsible pet owners spay or neuter their animals.

Everybody knows that responsible pet owners do their best to ensure their pets live long, healthy lives.

The above statements are part of a paradigm we have been following for decades: in many parts of the country, you almost never see an intact animal unless somebody is specifically planning to breed their pet.  And pet owners strive to ensure their companions’ long, healthy lives, each year spending more and more time and money on medical treatment, new food options, toys, even psychiatric prescriptions.

So what happens as more and more new information is uncovered that says spaying and neutering animals may not be the best way to ensure the longest and healthiest life possible? What are responsible pet owners to do when this cognitive dissonance has been foisted upon them?

Joint disease, cancer, and behavioral issues? Ovaries might mean a longer life for my pet? This does not jibe!

This is an issue that only pops up around the edges of pet ownership right now: you generally only hear about it from people with an interest in veterinary medicine, the “granola” crowd, or trainers and agility enthusiasts with an interest in structural health. But it is not going away,* and is an issue that will have to be addressed and reconciled by casual pet owners eventually. 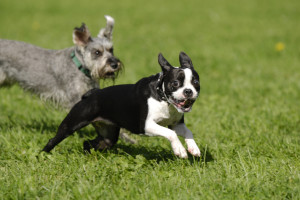 No paradigms here. Just a good romp in the field!

* in fact, “Long-Term Health Risks and Benefits Associated with Spay / Neuter in Dogs” which was published in 2007 is one of the most visited pages on our website, and continues to grow in popularity.

Here is a provocative take on rescue transports (what we refer to at NAIA as “humane relocation”) from Animal Ark that was published several months ago.

Particularly interesting is the author’s observation of the inherent drama that accompanies animal transport, as opposed to boring ol’ local adoptions:

And, lets face it: long-distance “rescues” are much more dramatic than local ones. It is easier, therefore, to get high-profile PR for them, like this spot on Anderson Cooper about a celebrity who paid to have dogs flown from California to a no kill shelter in New York. Note: While it is nice the rescuer flew the dogs to a no kill shelter in New York, no one seems to wonder why the no kill shelter took the animals, instead of simply driving over to New York Animal Control to rescue more dogs from death row there? You can bet that the PR for both the “rescuer” and the receiving shelter had a lot to do with it.

This is so obvious, but a point that isn’t made often enough — you have heroic people who drive or fly all day, and brave dogs on a journey from likely death into a loving home — it’s so much easier to put a face and story behind a dog you adopted from 1,000 miles away than a dog you simply picked out from the local shelter. And oftentimes, these dogs with the great backstory are marketed as being smaller (read: more desirable for many adopters), and you can pick them up with less paperwork and hassle than you can from the local rescue or shelter.

Which is great for the dogs that are being transported… not so great for your local dogs who still need homes or for solving problems at their source. 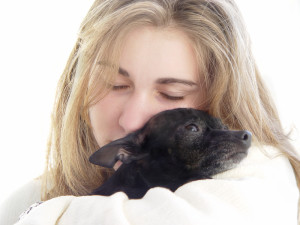 Let me tell you the story of Rocket…