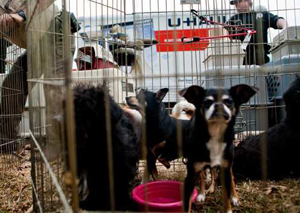 Bonnie Sheehan of the Hearts for Hounds rescue pleaded guilty to 14 misdemeanor charges tied to her January arrest, where more than 100 dogs were found crammed inside a U-Haul truck moving from California to Virginia. She received two years probation, a fine, and will not be allowed custody of any animals while on probation. Sheehan took responsibility for the abuse and decision to move the animals; all charges against co-defendant Pamela King-McCracken, a longtime Hearts for Hounds volunteer, were dismissed.

Reaction among animal lovers has been sharply divided. While the cramped, filthy trek itself is viewed with universal horror and disgust, opinions on Sheehan herself range from “It is tragic that such a well-meaning woman would make this horrible decision.” to “Put her before the Hague.”

Regardless of where you fall on that spectrum, it is something we can all agree is a tragedy — something that we never want to see happen again.