Ask the average Jane or Joe about dog breeding, and their most distant point of reference probably goes back 17 years to the mockumentary film Best in Show. If they have a friend or relative who breeds dogs, add another 20 years on to that total. And if they’re history buffs, they might be able to go back to the late Victorian era.

But people have been purposefully breeding dogs for a lot longer than that. Thousands of years, in fact — and new findings are pointing all the way back to the hunter-gatherers of Zhokhov Island 9,000 years ago…

Now it appears these ancient Arctic dwellers did something even more remarkable: They may have been among the first humans to breed dogs for a particular purpose. An analysis of canine bones from Zhokhov suggests the dogs there were bred to pull sleds, making this the first evidence—by thousands of years—for dog breeding in the archaeological record. 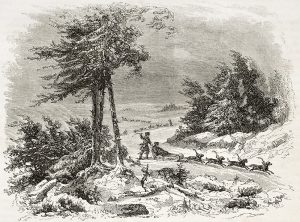 As these findings indicate, the length and depth of the human-dog bond is truly astounding.