We have long known that when it comes to dogs, the term “pet overpopulation” is a misnomer, and that we’ll most likely be facing a shortage of dogs in the near future — more potential owners than there are dogs available.

For the millions of American households that won’t feel complete without the companionship of the “family dog,” this could be a serious problem. So how do we head off this impending shortage at the pass? Well, one blogger has an idea! Just import them from foreign puppy mills!

Yes, I’m serious. Of course, the author does suggest raising standards to make them humane and respectable:

[…] we should look at an alternative strategy, which was employed by the high-end coffee industry, where American interests (private and non-governmental organizations) work with foreign organizations and countries to institute basic humane standards for animal welfare as it applies to breeding of dogs. Rather than an import ban of questionable utility (given all of the ways that commercial breeders/distributors can sneak dogs over the border in large volumes), why not target four to five countries and provide them with tools to enforce meaningful animal welfare standards and best practices? 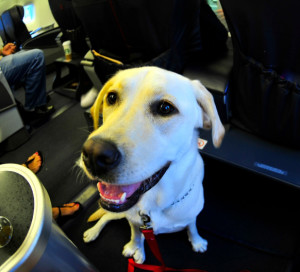 You can be sure that dogs imported into the U.S. for resale will not be flying first class.

People love animals, and they are going to get pets from one source or another. Nobody is questioning that. So the challenge of meeting that demand with dogs from humane, responsible sources is very real.

But just think about what it means that somebody is suggesting — with a straight face (we assume?) — going into countries with virtually no animal welfare standards, instituting “basic humane standards for animal welfare as it applies to breeding of dogs,” then putting those puppies through the stress of being shipped into the United States, and calling that part of a solution. This might work for coffee beans…

NAIA opposes the importation of dogs into the United States for resale, and finds the notion of sourcing our dogs from foreign breeding operations to be ludicrous.

We have to ask if the author really believes that the breeding of pets domestically, raising standards where need be, and sourcing dogs locally is so taboo that mass importation from foreign, large-scale kennels actually sounds reasonable? Or is this the work of a provocateur — the author just softening us up with an assault on the senses so great that we’ll be receptive to something that makes sense in the next installment?

At least for the first question, let’s hope not.

To assure the future availability of healthy, humanely raised pets in the United States, we need to look closer to home. Contact us at NAIA for solutions!