Some activists claim that a police officer shoots a dog every 98 minutes, while people in law enforcement often call dog shootings a rarity, and lament the fact that there is never as much (if any) outcry when a person is shot. Where does the truth lie? There are currently no accurate nationwide statistics available for police officers shooting dogs, but we know  it does happen, and any time it is avoidable, it is too often. Last weekend, there was a protest in Salt Lake City, Utah over the shooting of a Weimaraner inside a fenced yard, and earlier this year in Filer, Idaho, things became heated enough to spur a recall effort (which failed), after a police officer shot a disabled man’s dog during a child’s birthday party.

Stories like this are far too common, but negative interactions between law enforcement and dogs are not the rule, and the stories that cause outrage get the most attention. While often late in coming — typically a reaction to pets being tragically killed — more and more and we are seeing police receive training in non-lethal methods of dealing with dogs, and just a few days ago we get this story…

After responding to a residential burglar alarm Thursday morning, Sgt. Gary Carter and Officer Heather Gibson were flagged down by some residents walking in the 400 block of North East Street who reported that a dirt-covered, white pit bull was chasing them in an “aggressive” manner. “This dog is so vicious, please get him,” one woman reportedly yelled to the officers.

If you are the type who follows police/pet encounters in the news, you are probably holding your breath right now, given what is typically reported, but what happens next is, quite frankly, adorable:

Carter and Gibson coaxed the hungry and thirsty canine into a patrol car with a protein bar and some head scratches. 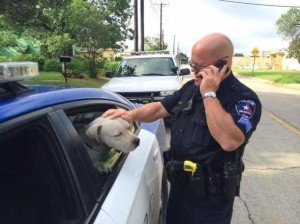 Getting some pets from the police

Had the officers been frightened by the dog’s dirty appearance or apparent breed type, this could have ended very differently. Certainly it helps that Sgt. Carter is a dog lover, but even if he nor Officer Gibson had a history with dogs, Arlington has safeguards in place:

The Arlington Police Department implemented mandatory training two years ago to help officers identify the difference between aggressive and nonaggressive animals and know how to respond in situations when a dog is inside a home or roaming freely in a neighborhood.

People in the neighborhood were scared and calling for help, saying the dog was “vicious” and “chasing” them. The officers, who had received the mandatory training recognized that the dog was in fact, merely dirty and hungry, and deescalated the situation in a humane, touching manner. Sometimes, it just takes a little bit of knowledge to save a life; we hope to hear more stories that end like this as more police officers receive training in how to properly deal with domestic animals.