A health alert has been issued by the Centers for Disease Control and Prevention (CDC) regarding the increasing number of dogs being imported from rabies endemic countries with questionable documentation.

A particularly disturbing line in the alert is this:

These documents state that the puppies are older than 4 months of age and
fully immunized against rabies. However, upon examination, these animals were found to be less than 4 months old and sometimes as young as 4-8 weeks of age. Documentation has also included falsification of birth location and breed registration.

Clearly they are seeing a lot more than honest, innocent mistakes.

One of NAIA’s longstanding campaigns has been to awaken the public to the threats posed by the irresponsible importation of animals into the American pet marketplace — especially from countries still suffering from diseases and parasites that have been largely eradicated in the United States.

NAIA appreciates the attention the CDC is giving this matter, and looks forward to the publication of the finalized USDA rule outlying the importation of dogs less than 6 months of age for resale (which includes transfer by adoption). 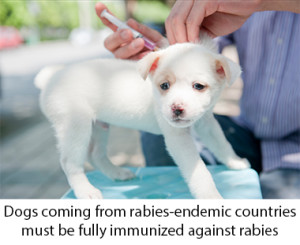