NAIA Trust is excited to announce the addition of Sara Chisnell as the Legislative Director. Ms. Chisnell is a Michigan based attorney with an extensive background in animal law. Sara’s role with NAIA Trust will focus on expanding state and federal outreach by promoting reasonable laws, policies and regulations to protect animals and the people who care for them. 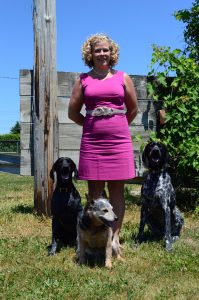 Sara has successfully petitioned for moderate animal-related laws at a grassroots and national level. She was previously involved with NAIA through National Conferences and various legislative issues where she connected with NAIA President, Patti Strand. “One of Sarah’s greatest assets is that she’s an animal person. She’s heavily involved in the animal world in all aspects of her life. This is an enormous strength when working with animal related legislation,” Patti says of Sara.

Sara graduated from Otterbein College with a BA in Equine Science. She then went on to Michigan State University College of Law, where she focused on animal law.  Sara spent nine years with the United Kennel Club (UKC) focusing on canine legislation. She also served as in-house counsel and the representative for pointing breeds. Ms. Chisnell is active in the North American Versatile Hunting Dog Association, and regularly trains and tests her German Shorthaired Pointers in Hunting Retriever Club. She is passionate about canine performance sport, in particular dock diving. She also trains young horses in basic dressage for a Warmblood breeder.

Sara commented on her new role saying, “I’m very excited for this opportunity to use my education and background to help NAIA in its quest to promote animal welfare, while also protecting the rights and interests of those whose livelihoods are animals. The human-animal bond is a very important and primary part of my life; preserving it is essential. I consider myself quite lucky to have found a position so intricately entwined with my life’s passion of both dogs and horses.”

NAIA Trust is a 501(c) (4) organization. The Mission of NAIA Trust is to promote the welfare of animals, strengthen the human-animal bond and safeguard the rights of responsible animal owners, enthusiasts and professionals through education, legislation and the courts.